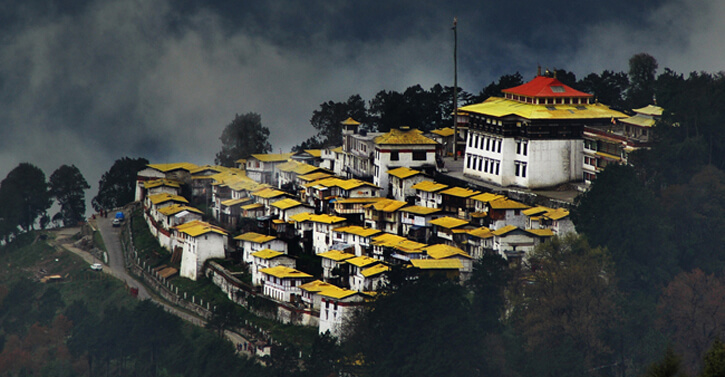 When the sun first strikes India, it shines upon Arunachal’s wild jungles and tribal communities. Arunachal, the name means “land of rising sun”. Arunachal Pradesh is a sprawling mountainous territory, a land of mighty rocks and luxuriant forests, gentle streams and raging torrents present a breath-taking spectacle of nature in all her glory, raw and unspoiled and untamed in wild profusion of flora and fauna, customs, language, and dress.

Arunachal Pradesh is one of the 29 states of India and is the northeastern-most state of the country. Arunachal Pradesh borders the states of Assam and Nagaland to the south and shares international borders with Bhutan in the west, Myanmar in the east and is separated from China in the north by the disputed McMahon Line. Itanagar is the capital of the state.

It is a land of lush green forests, deep river valleys, and beautiful plateaus. The land is mostly mountainous with Himalayan ranges along the northern borders crisscrossed with mountain ranges running north-south. These divide the state into five river valleys: the Kameng, the Subansiri, the Siang, the Lohit and the Tirap. All these rivers are fed by snows from the Himalayas and countless rivers and rivulets except Tirap which is fed by Patkai Range.The mightiest of these rivers is Siang, called Tsangpo in Tibet, which becomes the Brahmaputra after it is joined by the Dibang and the Lohit in the plains of Assam.

High mountains and dense forests have prevented intercommunication between tribes living in different river valleys. The geographical isolation thus imposed has led different tribes to love their own dialects and grow with their distinct identities. Nature has endowed the Arunachal people with a deep sense of beauty which finds delightful expression in their songs, dances, and crafts.

The climates vary from hot and humid in the Shivalik range with heavy rainfall. It becomes Progressively Cold as one moves northwards to higher altitudes.Trees of great size, plentiful climbers, and abundance of cane and bamboo make Arunachal evergreen.

Tropical rainforests are to be found in the foothills and hills in the east on the border with Myanmar. Northernmost border is covered with Alpine forests. Amidst the highly rugged terrain, there are green forests and plateaus.

The history of pre-modern Arunachal Pradesh is unclear. According to the Arunachal Pradesh government, the Hindu texts Kalika Purana and Mahabharata mention the region as the Prabhu Mountains of the Puranas, and where sage Parashuram washed away sins, the sage Vyasa meditated, King Bhishmaka founded his kingdom, and Lord Krishna married his consort Rukmini.

There are places of worship and pilgrimages such as Parasuramkund and 400 years old Tawang Monastery, The sites of archeological excavations like Malinithan and Itanagar. The serene beauty of lakes such as Ganga lake or Sela lake or the numerous variations of the scenic beauty of the snowclad silver mountain peaks. Lush green meadows where thousands of species of flora and fauna prosper.

In addition, the state provides abundant scope for angling, boating, rafting, trekking, and hiking. Besides, there are a number of wildlife sanctuaries and national parks where rare animals, birds, and plants will fascinate the visitor.