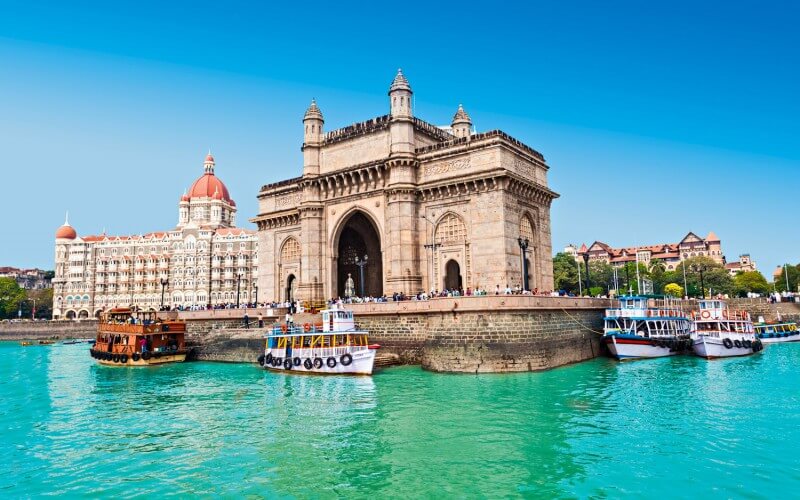 Maharashtra is a religious and trippy state which attracts many tourists from different states and foreigners. It was the second most visited Indian state by foreigners and fourth most visited state by domestic tourists in the country in 2014. Aurangabad is the tourism capital of Maharashtra.

MUMBAI the city of Bollywood is the eastern equivalent of New York City and Los Angeles, the financial capital and entertainment capital of the country. Places of interest in Mumbai include: Haji Ali Dargah situated about 500 yards from the shoreline in the middle of the Arabian Sea. Along with being a religious place, it is a great attraction for tourists, Gateway of India, The Bandra-Worli Sea Link, Chhatrapati Shivaji Maharaj Vastu Sangrahalaya, Chatrapati Shivaji Terminus, a humongous architectural stone structure built by the British more than 200 years ago, Downtown Mumbai – reminiscent of the 19th century British architecture.

Girgaon chowpati beach, Madh island beach and other beaches towards the south of Mumbai. Elephanta Caves carved out of a giant stone on an island are a short ferry away into the Arabian sea. Due to its cosmopolitan nature, Mumbai has proven a popular tourism destination most often visited by Indians.

Nashik, this city is famous for its Grapes and Vineyards. It is known as “The Wine Capital of India” owing to 22 wineries being located here out of a total of 46 throughout India. Several wine festivals and wine tasting tours are held in this region. Nashik is also surrounded by various forts and hills and has an abundance of hiking trails which is adored by every tourist. It is a city having a lot of religious and mythological significance. Lord Rama lived in Panchavati during his exile as mentioned in the epic Ramayana.

It is famous for its numerous temples like Kalaram Mandir, Trimbakeshwar Temple – one of the 12 Jyotirlingas. The river Godavari, also known as the Ganga of the South, originates from the Brahmagiri Hills in Trimbakeshwar. the Nashik-Trimbakeshwar Simhastha is one of the four Kumbh Melas held every 12 years in Nashik.

Pune is the cultural capital of the state of Maharashtra, is said to be the educational center of India. Pune has forts dating back to the seventeenth century such as Sinhagad, Purandar, Shaniwar Wada (a weekend residence of the Peshwas) and Lal Mahal (the red palace), the residence of Chatrapati Shivaji Maharaj.

Pune also has educational institutes of repute such as Fergusson College, a 200-year-old college built by the British and a good city to experience the astonishing nightlife, Visit us to avail the amazing experience of nightlife in Pune.

Ambajogai is the city lies in the central part of Maharashtra and cultural attraction of tourists for cultural heritage places. The Shivani Caves and Ambajogai Temple, The town named Ambajogaiby goddess Ambabai – Yogeshwari a heritage temple. There is an ancient underground cave called Shivleni Caves (Hattikhana) or Jogai Mandap declared as a heritage point (Archaeological sites in Maharashtra), where Lord Shankar, Nandi and Elephants were carved in stone. The town has other heritage temples like [Sakleshwar] 12 khambhi, Kholeshwar, Mukundraj cave and Dasopant Swami Samadhi, Kashivishwanath, Amruteshwar Temple, etc.

In the 13th century “Swami Mukundraj” wrote first Marathi poetry ‘Viveksindhu’ [Meaning: The Ocean Of Wisdom’] in Ambajogai. This work is widely acclaimed for its literary quality as well as the philosophical content. It remains not only the first but among the best literary works ever produced in Marathi. Ambajogai has good connectivity by road and railways. Ambajogai is widely considered the educational and cultural capital of Marathwada.

This city lies in the central part of Maharashtra called Aurangabad attracts tourists for its natural beauty. The Ajanta Caves and Ellora Caves, that lie on the outskirts of Aurangabad are internationally renowned for man made caves and intricate carvings in them. Ellora is notable for having a unique monolithic vertically excavated building known as Kailasa temple, Ellora and Ajanta Caves is notably for Lord Buddha in stone.

Ancient Buddhist life has been depicted in delicate stonework. While Ajanta is completely buddhist caves, Ellora caves belongs to Buddhism, Hinduism and Jainism. Summers are not advisable for touring. There are other famous places of interest like Bibi Ka Maqbara (The Taj Mahal of Deccan), Daulatabad Fort, Panchakki, Sunheri Mahal etc. Aurangabad has good connectivity by air, road and railways. Maharashtra attracts many tourists from different states and foreigner and was the fourth most visited state by domestic tourists in the country Aurangabad is the tourism capital of Maharashtra.

The winter capital of the state is a wonderful city. With a tradition of producing the best Oranges, this city is known as the City of Oranges. Nagpur is also known as second most greenest city in India due to number of trees in the city. The tourism in Nagpur is due to large number of National Parks/Wildlife Sanctuaries surrounding Nagpur.

During the colonial rule, the British developed many hill stations throughout India and in Maharashtra to escape the heat during the summer months.the colonial hill stations are the most beautiful attraction to the tourists which include Amboli, Chikhaldara,igatpuri,jawhar, kariat, khandala, lonavala, mahabaleshwar, matheran, panchgani, panhala, toranmal.

Shirdi, near Nashik is the location of the temple of Sai Baba – a hugely revered God-like priest and his birthplace at Pathri, Tuljabhavani temple at Tuljapur, Gajanan Maharaj temple at Shegaon, Mahalakshmi temple in south Mumbai, Haji Ali Dargah, a popular mosque built in the sea off the coast of Worli, Mount Mary church in the suburb of Bandra, Sarasbaugh Ganpati Mandir, Dagdusheth Halwai Ganpati.

Some of the temples in Pune are Parvati temples, Chaturshringi Temple, Pataleshwar and many temples of Lord Ganesh in the cross roads of the peths. Osho International Meditation Resort in the area of Pune also one of the popular place which attracts number of devotees. Hazur Sahib Nanded, famous Gurdwara near Nanded, is also one of the tourist place in Maharashtra. Vithoba temple, Pandharpur is the main center of worship for the Hindu deity Vithoba, believed to be a local form of god Krishna or Vishnu and his consort Rakhumai. It is the most visited temple in Maharashtra. The Warkaris start marching from their homes to the temple of Pandharpur in groups called Dindi (procession) to reach on Aashadhi ekadashi and Kartiki Ekadashi. A dip in the holy river Chandrabhagaon whose banks Pandharpur resides, is believed to have power to wash all sins. All the devotees are allowed to touch the feet of the idol of Vithoba.